A perfect example of this is what happened at the University of South Carolina. Recently, we took a walk past the A’ja Wilson statue that stands right outside Colonial Life Arena in downtown Columbia. The unveiling of the statue was a watershed moment for not only Wilson herself and the entire Gamecocks athletic program, but also for women’s sports as a whole.

Wilson has only spent a few seasons within the WNBA since being drafted No. 1 overall to the Las Vegas Aces in the 2018 draft. Since then, she has been named a WNBA All-Star, a WNBA MVP, has participated in a WNBA Finals and has participated with Team USA at the Olympic Games.

As historic as Wilson’s South Carolina career was – and that she is regarded as perhaps the greatest basketball player in the school’s history, she is already on a clear path to being recognized, when all is said and done as one of the greatest in WNBA history.

Nine times out of 10, when we see statues erected outside sports arenas, they are almost always of men. Men have typically been the ones to be immortalized in history, because society has always associated sports with being more of a man’s activity. 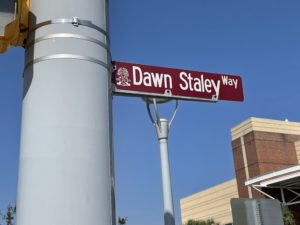 As we know, that has never been truly the case. Sports are every bit as much of a woman’s pursuit as they are a man’s pursuit. What is changing are the attitudes of how women – especially Black women – are perceived when they attempt to pursue sports as something to make a living off of.

Yes – we can have an all-time great in a sport be a woman.

Hopefully, Wilson being immortalized in the annals of Gamecocks history is only a sign of things to come for the landscape of women’s basketball and women’s sports. When Diana Taurasi retires from the WNBA, work needs to begin immediately on constructing a statue of her outside the Footprint Center where the Phoenix Mercury play its home games. There are plans for a statue of Lisa Leslie to stand outside of Staples Center – and one needs to be built of Candace Parker outside the same venue when she calls it a career. How about statues of the Williams sisters outside of the USTA Tennis Center in Flushing Meadows Park? Or one of Maya Moore outside Target Center?

To some, honoring our legends of women’s sports by immortalizing them via statues, plaques and street names may seem performative. It is anything but – and the emotion Wilson showed at her statue unveiling should tell one that it is more than simply performative. 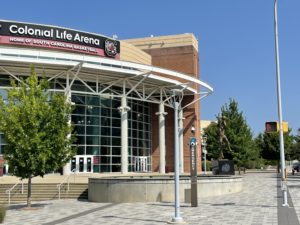 The most important message they send is to future generations – the A’ja Wilsons and Dawn Staleys of the future. Plenty of women and men will at one point or another call the University of South Carolina home. They will look at that statue and think that they themselves also else has the potential to become a name in the history of a school’s athletics program that will never be forgotten.

Statues and other forms of recognition are a reminder to the A’ja Wilsons of the future that they too will be honored and acknowledged for how much they contributed to not only a team or a school, but to society at large for making said society more equal, more free, more just and more fair.

A life is not important except in the impact it has on other lives.

When we unapologetically recognize greatness in women’s sports the right way, we are rightfully recognizing that impact.